What is a hex code for color?

A HEX triplet is a six-digit, three-byte hexadecimal number used in HTML, CSS, SVG, and other computing applications to communicate colors. 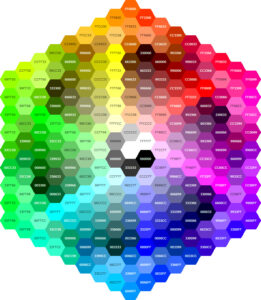 The bytes represent the red, green and blue components of the color. One byte represents a number in the range 00 to FF (in hexadecimal notation), or 0 to 255 in decimal notation.

This represents the least (0) to the most (255) intensity of each of the color components. Web colors specify colors in the True Color (24-bit RGB) color scheme. The HEX triplet is formed by concatenating three bytes in hexadecimal notation, in the following order:

For example, consider the color where the red/green/blue values are decimal numbers: red=36, green=104, blue=160 (a grayish-blue color). The decimal numbers 36, 104 and 160 are equivalent to the hexadecimal numbers 24, 68 and A0 respectively. The HEX triplet is obtained by concatenating the six hexadecimal digits together, 2468A0 in this example.

If any one of the three color values is less than 10 HEX (16 decimal), it must be represented with a leading zero so that the triplet always has exactly six digits. For example, the decimal triplet 4, 8, 16 would be represented by the HEX digits 04, 08, 10, forming the HEX triplet 040810.

The RGB system (Red/Green/Blue) codes a given color by association of Red, Green and Blue, this color coding dates from 1931 and was created with the first color televisions whose operating system was originally composed of electron guns that sent on a given point (pixel of the cathode-ray screen) a mixture of these three colors to create a color to obtain the desired shade: each color has then 2 power 8 possible intensities. In total the RGB (Red Green Blue) allows 16777216 possibilities of colors, much more than can perceive a human eye.