Colors are capable of transmitting sensations, representing reality or even encoding certain information. We can consider color as a variable phenomenon, physically and semantically, but this does not imply that color is something that cannot be explained or understood. 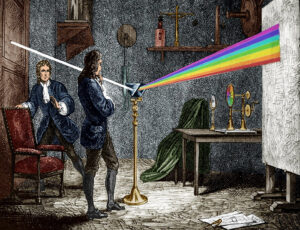 In 1665, Isaac Newton performed his famous glass prism and light beam experiment, through which the way in which light is broken down into the color spectrum was discovered.

The colors of the spectrum were arranged in a wheel, known as the “color wheel”. Colors that are close together on this color wheel are analogous, have minimal contrast between them and harmonize in an innate way. They are also similar in their color temperature.

Opposite colors on the color wheel are called complementary colors. Between them the contrast is maximum and the chromatic temperatures they have are opposite. The use of one or the other will depend on the sensation or nature of the composition itself.

To know how to use colors properly, it is necessary to understand what color is and how it works.

One of the best known color theories is the one elaborated by Johann Wolfgang von Goethe, written in 1810 in the book “Theory of Colors”, with the original title Zur Farbenlehre.

In it Goethe describes his studies on human perception and includes his conclusions on different color phenomena, such as colored shadows, refraction, achromatism or hyperchromatism. 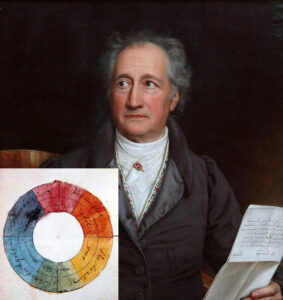 Goethe’s color theory was born as a critical reaction to Isaac Newton’s theory, as it differed in its explanation of the visible spectrum. While Newton divided the spectrum into seven colors, Goethe realized that the larger the aperture of the light beam, the more the spectrum is lost, manifesting an edge of a reddish yellow color, and another edge of cyan blue, with different shades of white between the two, and the spectrum only appears when the edges get close enough to the overlap of these colors. Newton saw light as composed of colors and Goethe however saw color as the result of the interaction between light and dark.

This theory of Goethe was more experimental than physical, and was not well received by modern physics, which defines darkness as the absence of light based on the ideas of Newton and Huygens.

Prior to the writing of this book, Goethe had conducted an investigation with the philosopher and historian Friedrich Schiller between 1798 and 1799 and established a scheme they called “The Rose of Temperaments”. In this research they related the colors with the different character traits of people, that is to say, he associated twelve colors with twelve different types of temperaments.

The symbolic and subjective part of Goethe’s studies does not detract from what is known today as the psychology of color. This study is not a science, but it has a great influence in fields such as the arts or design, due to the importance that color has in them.